A Love Letter to Athens, GA  By SabbaticalHomes
On October 14, 2017

A Love Letter to Athens, GA 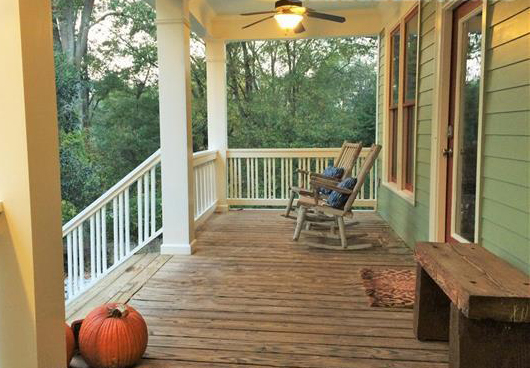 We wanted to put the spotlight on smaller college towns in America where the quality of life is high. These smaller spots on the map tend to offer big city advantages thanks to the cultural and cosmopolitan influx created by universities (such as theater, concerts, & public lectures) minus big city inconveniences (like high property prices, traffic, & pollution).

Athens, Georgia is a bright jewel, seated just under the foothills of the Blue Ridge Mountains. It’s a college town, home to just under 120,000 people which means it has all the amenities of a big city, such as an airport, great infrastructure, and more things to do than there are hours in the day, but a slower pace than most big cities. It’s a young city, with a median age of only 26. The air is filled with youth and promise, and the people who call this place home wouldn’t have it any other way.

Everywhere you look, there are art studios, galleries, and public arts centers, such as the Lyndon House Arts Center, and ATHICA (Athens Institute for Contemporary Art). Athens has more than one artistic side, however. They embrace theater, dance, and of course, music. Theater, in all its forms, can be found at a variety of venues. There’s the Canopy Studio, Athens Creative Theater, and Rose of Athens Theatre, to name a few. To complete the picture, visit legendary music hotspots in town that put Athens on the map since the 1970s. One of the best known is the Georgia Theatre. This live music venue is part of the Historic District in Athens and has housed many big-name music groups, including the likes of REM and the Goo Goo Dolls. It has also been featured in several music videos. Another well-known music venue is the 40-Watt Club.

There are two more things that Athenians agree on: food and history! One thing the locals love is their Weaver D’s soul food restaurant. It was featured in a REM song, and while it narrowly escaped closing down some years ago, it’s still going strong. They also have six local coffee roasters and six local brewpubs. Their love of food and drink is second only to their devotion to history. Did you know that the Peabody Award has been given by the University of Georgia in Athens since 1940? The Peabody Media Awards Gallery is a wonderful view of the past and present, complete with copies of rare original recordings available for research. Civil War museums and houses owned by individuals dot the landscape. There are also several historic buildings constructed by African-American groups and individuals, such as the Chestnut Grove School. It was built in 1896 and is one of the few enduring one-room schoolhouses left in Georgia. The impressive Morton Theatre was built by Monroe Bowers (“Pink”) Morton in 1910. It was part of a larger building owned by Mr. Morton, and many black professionals found it a safe place to practice dentistry, medicine, and pharmacy. It experienced its share of misfortune in later years, but in 1993, it was restored and re-opened. The theater is now a public space and has been used for a variety of purposes.

This is a town for performances, the arts, and for thinkers. No wonder the people who live here love to call it home.

Related: 10 Reasons to Take an Unpaid or Paid Sabbatical