Meet Our Scholarship Opportunity Finalists!  By SabbaticalHomes
On May 25, 2015 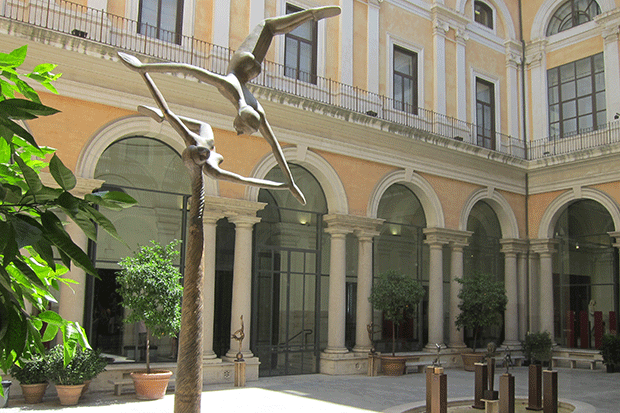 Scholars are consistently making the world a better place through thoughtful research, observation, and application. Inspired by graduate students’ zeal for learning, we created our very first scholarship opportunity to cover one month’s housing costs for one graduate student traveling for educational purposes.

We were so overwhelmed by the number of impressive applications we received that we decided to share our group of finalists’ research with the Sabbatical Homes community. Although we could only select one applicant to sponsor for summer housing, we hope that some of our members may be able to connect with these emerging scholars for future home arrangements. After all, our community was born to help academics, scholars, writers, artists, and friends find home matches across the globe.

Kat Balkoski is analyzing the shifting representations of conscription in French literature and cinema, from World War I through the Algerian War. Through readings of literary texts that address the experiences of men who were neither professional soldiers nor civilians, her research explores how their relationship to armed service, locatable somewhere between constraint and consent, could be described as an ethical and political double bind. She intends to participate in the unique intellectual community of the Ecole Normale Superieure in Paris via an exchange program with Columbia.

“Conscription is fundamental to understanding key questions about the individual’s relationship to the modern nation state,” Balkoski says. “By studying shifting representations of military service and the draft, we can gain insight into points of tension and contradiction in our conceptions of the individual’s rights and duties.”

Balkoski is particularly looking forward to exploring Ecole Normale Superieure’s library and working with a few of their professors who work on testimony and the first world war. She also intends to visit museums, archives, and memorial institutions dedicated to the memory of Poilus, Tirailleurs, Malgré-Nous, Appelés, and Harkis.

Shayani Bhattacharya’s research, entitled ‘Memory in Absentia: Innovations of Narrative Form in Postmodern Fiction,’ examines the conflict between recording and preserving memory, investigating the role of memory in the body of the text, and the its impact on the fundamental characteristics of narrative form and structure. By studying the archives and special collections of the University of Edinburgh, she will be able to examine the personal papers, notes, drafts, correspondence, and manuscripts of B.S. Johnson and Alasdair Gray in order to theorize on their process of these narratives.

The investigation of memory and the attempts to record it has brought about new ways of considering narrative techniques that reflect the impact of the struggle of memory within literary studies in the twentieth century.

“My project therefore examines the social significance of memory in the light of a post-human society,” Bhattacharya says. “In our contemporary digital age, it is important to investigate the role memory plays in shaping us as humans. Traveling and staying in Edinburgh for a month will enable me to develop as a literary scholar by training me in archival research, a crucial step in professional development in my field. It will give me access to otherwise inaccessible source materials and bring me in contact with a vibrant literary community.”

Anne Bordonaro’s research explores the teaching and learning of empathy in a unique instructional environment – a K-12 integrated school in Jerusalem, Israel, where parallel Palestinian and Jewish narratives of national history are taught to students of both backgrounds to promote national reconciliation.

Throughout the course of her sabbatical in Jerusalem, Bordonaro will observe teachers as they lead students in discussions of controversial topics in their national history, and then interview them to learn from their experience. Bordonaro also intends to have students complete several short written tasks that ask them to consider the perspective of “the Other” on important issues of national history. This particular school provides an ideal setting to investigate how history instruction, identity, and empathy can interact in authentic classroom settings – and in turn, how those findings can help develop specific teaching guidance for these types of scenarios.

“As research in Guatemala, Northern Ireland, the U.S., and other countries has demonstrated, without such guidance, teachers will continue to avoid teaching contested historical issues that involve students’ identities because they are so difficult to manage,” says Bordonaro. “Yet such issues are the very ones where empathy is most necessary, and schools are among the few settings where such an essential civic skill can be cultivated.”

Kathleen Broad’s research explores qualitative methodology in mental health services, and quality improvement initiatives within these health systems. Individuals suffering with co-occurring addiction and psychiatric illness are a vulnerable group, and may be particularly sensitive to issues that affect our current health systems, including lack of integration and disjointed clinical services. During a clinical elective at University of British Columbia, she is seeking to develop competency in managing clinical issues that uniquely affect the population of urban Vancouver – including the clinical management of heroin dependence, and exposure to local harm-reduction initiatives such as safe-injection sites and needle exchange programs.

Broad believes that the joy of qualitative research is that it blends seamlessly with the values of practicing psychiatry; in both instances, one listens carefully for the narrative of an individual or group, in order to develop a synthetic understanding of their lived experiences.

Sara Farhan’s research explores the numerous problems Iraq faces today and how they can be traced to the tumultuous period where a balance between pro-western policies and an eroding elite structure consistently failed to incorporate a burgeoning technocratic class into the state apparatus. Her travels will help her better understand Iraq’s post-colonial state formation and the complex process of governing heterogeneous populations in a region of political dynamism and social unrest.

Considering Iraq’s turbulent condition, traveling there to conduct research is not an option for Farhan. Fortunately, ample resources have been rescued, recorded, and protected by both American and British universities and authorities – hence her planned research travel to Washington, D.C. and London/Oxford.

“The National Archives of America and the Library of Congress located in Washington, D.C. hold the majority of the American perspective on Iraqi governance techniques during the period under study,” says Farhan. “Kew Public Record Office and the School of Oriental and African Studies, as well as Oxford’s Middle East Centre, house the majority of the British correspondence, governmental document, and official policies on Iraq from the Mandate period onwards. Visiting any of the aforementioned locations is essential to my research.”

Hazel Hollingdale’s PhD research explores whether employing more women in the financial sector could lead to more stable economic markets. Hollingdale is testing the “Lehman Sister’s Hypothesis,” which proposes that the 2008 financial crash (and other similar recessions) could have possibly been avoided had more women been employed in financial organizations. She will be working with a faculty member and join a research group at Harvard Business School, which is one of the reasons why she would like to further her research work in Boston.

“Because my research focuses on the American context of this topic, I want to perform this part of my research in well-known, large financial districts in the United States,” Hazel says. “Rather than just relying on the statistical interpretation of my research, performing the interviews and observation of these financial organizations will provide an enhanced understanding of what happens within them.”

The interviews and field work that Hollingdale plans to conduct in Boston will help make sense of statistical findings by providing insight into worker’s experiences in financial occupations, as well as paint a clearer picture of how risk is perceived and evaluated–and whether factors vary for men and women employed within the organizations. The findings of her research could indicate that there may be greater incentives to hire women into well-paying financial jobs more often – resulting in both greater gender equity and more stability within economic markets.

Ingrid McCarroll seeks to understand the high rate of corrosion in magnesium alloys, which is the major barrier to their use in transportation, electronics, batteries, and more. Her time spent at Oxford University will allow her to use equipment that cannot be accessed anywhere else. While there, McCarroll will collaborate with the Oxford Atom Probe group, as the team of researchers work to discover significant implications to develop new magnesium alloys and their applicability in a wide variety of industries.

Atom probe tomography is a unique microscopy technique being used to investigate the atomic scale analysis of early stage oxidation in magnesium alloys. As a relatively new form of study, there is still significant room for improvement when it comes to understanding the best methods of preparing specimen, acquiring data, and successfully analyzing the results.

“Being one of the first users of this new technology will give me experience in an area that few others will have had, and it has the potential to make a big impact in years to come,” says McCarroll. “This provides a great platform for developing seminars and workshops on the techniques and the possibilities that it provides for further research. To be in such a place so early in my research career is invaluable to my future development and will exhibit my competency and desire to work in new spaces with new ideas.”

Sukrit Sabhlok investigates the link between constitutional design and military success using the case study of the American Civil War, taking a look at centralized constitutions like the US Constitution and decentralized constitutions like the Confederate Constitution in order to determine which is better for military effectiveness. By traveling to America to meet with American History experts, Sabhlok hopes to improve his Masters’ studies and help set himself up for a PhD in the United States in the future.

“I am a political science student studying America under an Australian supervisor whose primary research is not America. At times I feel that exposing my work to the critical review of those with greater expertise in my area of study could significantly improve my work,” Sabhlok says. “The Mises Institute extends its library for use by researchers such as myself as well as access to its scholars for guidance, so any subsidised accommodation would be beneficial in this regard. The institute also runs conferences at which I could present a paper based on my Masters for review.”

Sabhlok plans to travel to Atlanta, Georgia and explore both Georgia and Alabama, as both states were members of the Confederacy that seceded from the American union during the Civil War. He plans to gain first-hand access to archival material that would assist him in advancing the understanding of his topic.

Accommodating student research affects positive change. As a member of the Sabbatical Homes community, you know that our philosophy is to run an equitable system that supports academic travel within the scholarly community. To that effect, if in any way you are able to help serve these impressive scholars of tomorrow, please do get in contact, as we would like to see them all succeed in their studies.