Founder on the Move: UBC, Vancouver  By Rebecca McCalla
On October 24, 2019

Founder on the Move: UBC, Vancouver 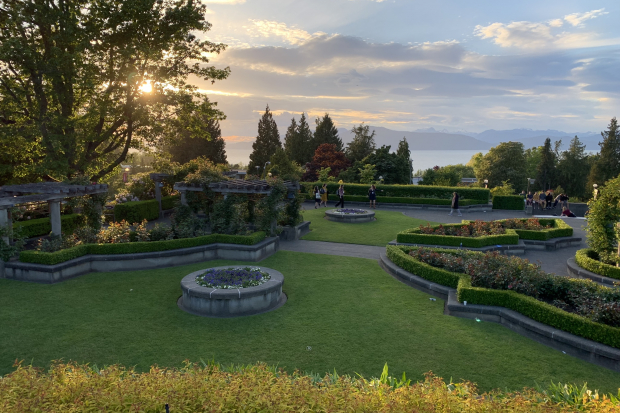 This past Spring, SabbaticalHomes.com founder Nadege Conger visited the University of British Columbia’s Vancouver campus to attend an industry conference.

As always, Nadege loves to immerse herself in a university environment and connect with SabbaticalHomes.com members in the area. This trip included a healthy dose of both of those along with some thoughtful reminders of the original inhabitants of this beautiful delta: the Musqueam First Nation.

Like much of Vancouver, the UBC campus is located on lands once occupied by indigenous people, in this case the Musqueam First Nation. Named after a flowering plant that grows in the nearby Fraser River estuary, the Musqueam retain their strong spirit and keep their language and traditions alive throughout the area.

There are Musqueam artwork and influences throughout the campus, but as with much of North America, there is also a difficult history with white explorers and settlers. One example that occurred in this area as well as across Canada were the Canadian government-funded residential schools.

Native children were forced to live in these schools for the purpose of assimilation with white culture, but the experience was heartbreaking, extremely stressful and sometimes abusive to the indigenous children separated from their families.

To say the least, it is not a chapter of Canadian history that many are proud of, and the government today is making efforts to make up for its legacy of colonizing policy. In the past two decades, the Canadian government has issued formal apologies and offered some financial reparation to those affected.

In 2015, the Truth and Reconciliation Commission issued a formal report detailing its Calls to Action, legal and policy changes necessary to start making amends. It can never truly make up for the past, but at least it is a step in the right direction.

UBC is committed to being a leader in making reconciliation a reality. In 2006, the University and the Musqueam signed a Memorandum of Affiliation that formalized a partnership that has inspired educational support for the Musqueam children in the area and programs to teach the Musqueam language to anyone who is interested.

One very meaningful custom that has developed at UBC is acknowledging the ancestral territories its campus is situated on – land and people with a vital heritage. According to Linc Kessler, professor in First Nations and Indigenous Studies at UBC, it is increasingly common now to start UBC events with an acknowledgement of Musqueam “traditional and unceded lands” to ensure that the university community is maintaining its commitment to an educational partnership and better understanding for future generations.

As well, among all of the powerful native art throughout the campus, it was incredibly moving to see the Reconciliation Pole, installed on campus in 2017. It is an artistic symbol of apology to the Musqueam people, and its installation and dedication were attended by over 3000 people.

As across much of Canada, at UBC today the goals of inclusion and learning are foremost. Read more here about Musqueam 101, the Musqueam language course offered weekly on campus. There are also youth programs through the Bridge Through Sport program, designed to support Musqueam children with sports, a youth garden and math, science and reading programs after school.

While this history is sensitive and sad in so many ways, it is inspiring to see that UBC is recognizing its troubling past and working to create a better future. Beyond official agreements, UBC administration and faculty are working to keep the native language and culture alive and thriving on these ancestral grounds.

After attending the conference that sparked learning so much about the Musqueam history of the campus, Nadege also met UBC faculty member and SabbaticalHomes.com member Professor Deborah Butler.

Like many members, Deborah is part of the housing solution in her area by creating more space within her own property. As in many university towns, space for housing close to campus is increasingly limited. We are proud to have members like Deborah who are adding to the housing supply in creative ways and providing a trustworthy, quality place for academics to stay.

Deborah has converted her “laneway” guesthouse into a very Vancouver type of rental that is creating more affordable, sustainable housing in the area. She worked hard to renovate this space into a beautiful, welcoming home for her guests.  As you can see from the video, Deborah was very happy with the process of finding and vetting her new renters, with the support of SabbaticalHomes.

Founder on the Move is a series of articles written by and about Nadege Conger, Founder of SabbaticalHomes.com as she connects with members all over the world. Nadege created the site in 2000 to help academics worldwide pursue their research by providing a home exchange and rental website.