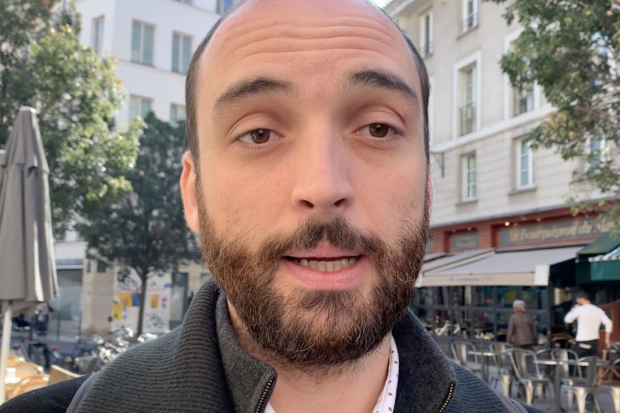 While visiting in Paris, SabbaticalHomes.com Founder Nadege Conger had the opportunity to enjoy a cup of coffee with Dr. Florian Lionnet at the Cafeotheque. He shared the work he does in studying and preserving an endangered language in Chad, Africa.

They also discussed the challenges he has faced while on sabbatical in Paris (and Chad) during the pandemic. At the end, he spoke a little about his experiences with SabbaticalHomes in finding housing (and tenants for his apartment) during these uncertain times.

Dr. Lionnet works to help preserve Laal, a language spoken by less than 1,000 people in Chad. This has taken him around the world, from his home university in Princeton, New Jersey to Europe and Africa. He is studying and documenting this oral language, spoken by a small community in two villages in southern Chad. He works directly with 300 Laal-speakers who live in the village where he has stayed.

While staying in the village from January to March, Dr. Lionnet records people’s stories and dances on videos. From those recordings, he has created digital “memory cards” which are distributed to families on their mobile phones. The videos are also archived with DOBES (Documentation of Endangered Languages), the UNESCO world heritage organization.

Documenting an oral language allows for the conservation of the cultural heritage and anthropological studies. It gives an insight into the stories and the “imagination” of the people. The fact that the language is being studied and documented by a foreigner can also be a source of pride to the people speaking it, helping to slow the abandonment rate as the language gains prestige.

Returning to Paris, France: Analyzing and Translating the Written Version of the Laal Language

When back in Paris, Dr. Lionnet analyzes, translates and organizes the data he has collected on the ground in Chad. In the Fall of 2020, he also taught Princeton Linguistics classes online from Paris.

Since his research work involves describing the language, he has proposed an alphabet, collected words in a Laal-French-English dictionary, and is in currently working on the description of the grammatical structures of Laal. To this point, this has not been a written language, but there is a richness and beauty to the stories, riddles, and songs in Laal that he strives to preserve for future generations. Now, some of the riddles and folktales have been written and published so they do not disappear completely.

Here is a riddle he shared:

I tie my horse inside, but its tail sticks out. What is it?
(Smoke)

He emphasizes how important it is that he, an outside researcher, is merely proposing this writing system. To Dr. Lionnet, it is for the people who speak the language to decide if they want to one day use what he has created or perhaps modify the written version of the language in the future to fit better their needs. His scientific work on the language has been published in academe, but have stayed in academic circles to date; they are not yet circulated or read by the people in Chad, contrary to the dictionary and the edited stories, folktales, songs, riddles.

During his time in Paris, Dr. Lionnet has a community of Africanists associated with the CNRS where he has use of an office as an invited scholar “chercheur invite”. In Chad, he is a member of CRASH: Centre de Recherches d’Anthropologie en Science Humaines.

Dr. Lionnet was Interested in languages – and specifically the structure of languages – very early on, from about the age of 10. His father was a medical doctor in the French Army, and the family traveled a lot as he was growing up. He lived in New Caledonia in the South Pacific as a teenager and has also lived in francophone African countries, so his dedication to the language of Laal in Chad is no coincidence!

Dr. Lionnet joined Princeton as an Assistant Professor of Linguistics, focusing on sound systems (phonetics/phonology), typology, historical linguistics, and of course, language documentation and description. He has a 3-year renewable contract with the university and will come up for tenure in the next couple of years.

Going on Sabbatical During a Pandemic: Dividing Time Between Princeton, Paris & Chad

Princeton University is very generous with its sabbatical policies, as they can be taken every two and a half years. His current stay abroad has been quite a bit longer than it would have been due to pandemic-related Visa restrictions that have affected many academics around the world.

Dr. Lionnet originally went on Sabbatical in May 2019 and had planned to be gone for one year, in order to do research on Laal in Chad. When the COVID-19 pandemic started during the Spring of 2020, he was unable to return to the United States…and still unable to come home to Princeton in the Fall of 2021.

Luckily he was able to continue his work in Paris, but it has been challenging in many ways. One of the most challenging parts of all this uncertainty has been the housing part of the puzzle.

In Fall 2020, he found an apartment in Paris thanks to SabbaticalHomes.com, and then again in the Fall of 2021. When his original tenants left his Princeton home, he posted it on SabbaticalHomes.com and found tenants in less than 24 hours with three weeks of lead time.

Like many of our members, he had heard about SabbaticalHomes.com through word of mouth. He has found it easy to use and practical, thanks to the nature of the people who use the service. We are grateful to have people like Dr. Lionnet in our community, and hope that he continues to experience the enjoyable rapport with those he has matched with.

Obtaining a United States Scholar Visa: Amidst the Bureaucratic Backlog

As the pandemic travel restrictions have loosened, the United States gave priority to foreign students and some visiting foreign professors were able to get their visas. F-1 and J-1 Visiting Scholar Visas were delivered to some, but other visas like the one Dr. Lionnet needs have been blocked for 20 months.

The first appointment he has is now scheduled for June 2022, but he is hopeful to get an earlier date to ask for a visa renewal and apply for a green card because he is a French citizen. It would be nice to be able to return to his job and home in Princeton, New Jersey!

Related: How to Apply for a Scholar Visa to the United States